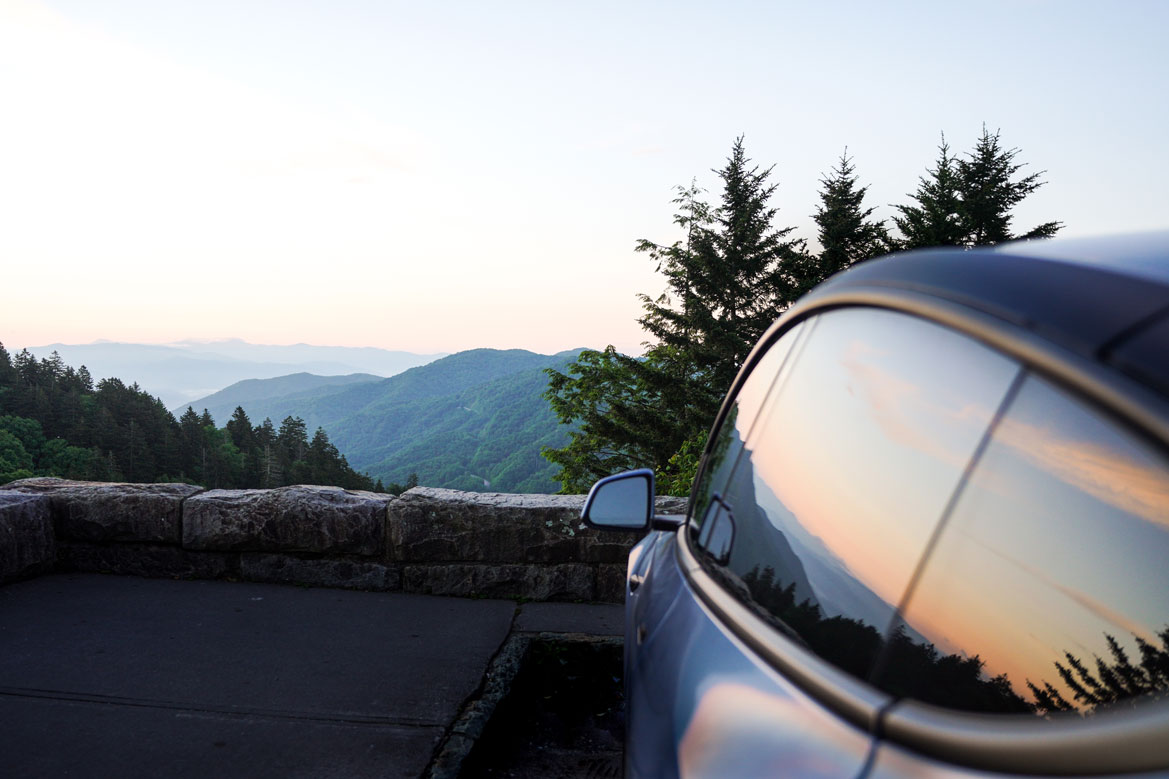 Camping in our Model Y for the First Time

My coworker Marlee and I convinced our boss (Ji) to let us take his Model Y on a road trip through the Great Smoky Mountains. In total, we drove about 850 miles through cedar and maple trees, saw some bears in Cades Cove, and made it to Linn Cove on the Blue Ridge Parkway, all while learning how to use autopilot and charge. We’re not Tesla owners (yet), so this was a challenge we were more than ready to conquer.

While I love to camp, I’m used to tent or hammock camping. I’ve never had the opportunity to camp in a luxury car (I also never thought I’d ever say that). And Marlee has never been camping, so this was a first for the both of us.

Needless to say, this was a very educational experience. Here are some things we learned throughout this adventure:

Like my mom always says, “Triple check everything.” If only I had listened to her. Through all the stress stemming from charging, trusting autopilot, and trying not to crash driving on the rainy mountain roads, I totally overlooked our reservation days at the two campsites we were staying at over the weekend. I swapped the dates in my head and drove us to the wrong one! Luckily, both places worked with us, and we were able to swap nights. This definitely could’ve ended a lot worse by affecting our range if we had to backtrack to our original campsite. Other than that hiccup, the planning worked out in our favor as we mapped out the route on paper, penciling in miles and charging points. Knowing our route beforehand really helped us. I never thought about having to do this with my Dodge, as you know gas stations are on every corner.

While we were thankful we were able to swap nights, we had not anticipated the different chargers we’d need. We originally booked an RV site with 50 amps. However, the only campsite we could get last minute was a tent electric hookup with 30 amps. I hadn’t thought this would be an issue, but this was before I understood the difference that made.

Even though we made sure we had a Nema 14-50 (the most common adapter at campsites for Teslas), this new site needed a 30A connector, which we didn’t have. Due to this, we had to use a wall plug, which basically let us have cabin air when we slept, but gave us no extra charge for the morning drive. Luckily, we had 200 miles when we parked that night, which got us to our next destination, Asheville, NC, the next day with no issues.

Another challenge we encountered at the campsite was wet firewood, as it had rained the few days before. Our plan was to cook dinner over the fire both nights, but that was near impossible the first night due to all the wood being wet. The second night we stopped and purchased a fire starter, however, I highly recommend just packing that from the start.

Driving through the woodsy mountainside, we didn’t always have the best service. This was only a major issue once when we were trying to get to our campsite the first night. We knew the general direction of where the campsite was, so we drove until we had enough service to type it in the touchscreen. From then on, having the addresses of our destinations typed in the notes on our phone was perfect, so we could look it up on the Tesla offline map.

We used a Dreamcase folding mattress set to sleep on. I’d suggest if you’re camping with another person in your Model Y, you must really like them! We were very snug, so if you like your space, maybe find an alternative sleeping arrangement. But, for two women, we had enough room to be comfortable. We’d also suggest bringing an extra pillow or two. The Dreamcase is made of a memory foam material, and it’s super easy to set up and pack up.

Overall it was a great experience! We learned more about the capabilities of the Model Y, and I’d be lying if i haven’t already started looking at prices for my own Tesla! Some things we’ll make sure to pack next time would be a fire starter, a 30A connector, and extra pillows! We’ll definitely try to convince Ji to let us take the Model Y out for another road trip…maybe across the US this time! (:

Written by Destiny Kerr-Brown, also known as Destoe. She is the Customer Experience Manager for TESBROS. Marlee Crawford is the Digital Content Producer for the company.

Should You Chrome Delete Your Tesla? DIY vs Pro Install